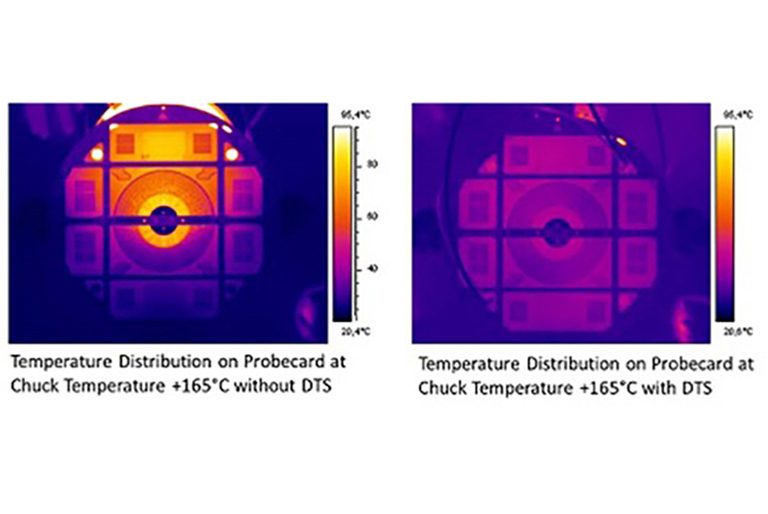 DTS is an add-on to ERS’ existing wafer chuck solutions that prevents unwanted thermal influence from the test procedure to adjacent components in the system, such as probe card or prober top plate. During the process, the test equipment heats up to temperatures in the range of 150 to 200°C or higher. The heat extends to close by components. This effect negatively impacts numerous relevant parameters such as mechanical precision or the electrical performance of the probe card. Available solutions to face this problem typically try to deal with the thermal effects, although with varying success. Going further than these solutions, DTS is the only system that addresses the root of heat distribution by preventing thermal changes to the neighboring components. The system detects thermal hot spots in the assembly caused by the moving chuck and then selectively applies cooling to these spots. This results in thermal stability of the whole test assembly; critical components such as probe card and head plate always remain at their optimum operating temperatures. In addition, the system avoids the typical “soak times” and time-consuming realignments associated with existing solutions. Exemplary field studies have shown, that users can achieve up to 25 percent higher test throughput.

DTS can be integrated into most existing wafer test set-ups, including as field retrofits. Massive parallel testing though is an exception as there is limited space for shielding the probe card. In virtually all other semiconductor manufacturing segments, the DTS is a relevant option. Given typical test costs in this industry, return on investment can be achieved in less than a year.

DTS will be introduced at ERS electronic’s booth 2125 in Hall 2 at the Semicon Japan trade fair, taking place from December 16 through December 18 in Tokyo.

ERS electronic GmbH, based in Germering near Munich, has been producing innovative thermal test solutions for the semiconductor industry for 45 years. The company has gained an outstanding reputation in the sector, notably with its fast and accurate thermal chuck systems for test temperatures ranging from -65°C to +500°C for analytical, parameter-related and manufacturing tests. Today, thermal chuck systems developed by ERS in its product families AC3, AirCool©, AirCool© plus and PowerSense© are an integral component in all larger-sized wafer probers right across the chip industry.

back
Back to top